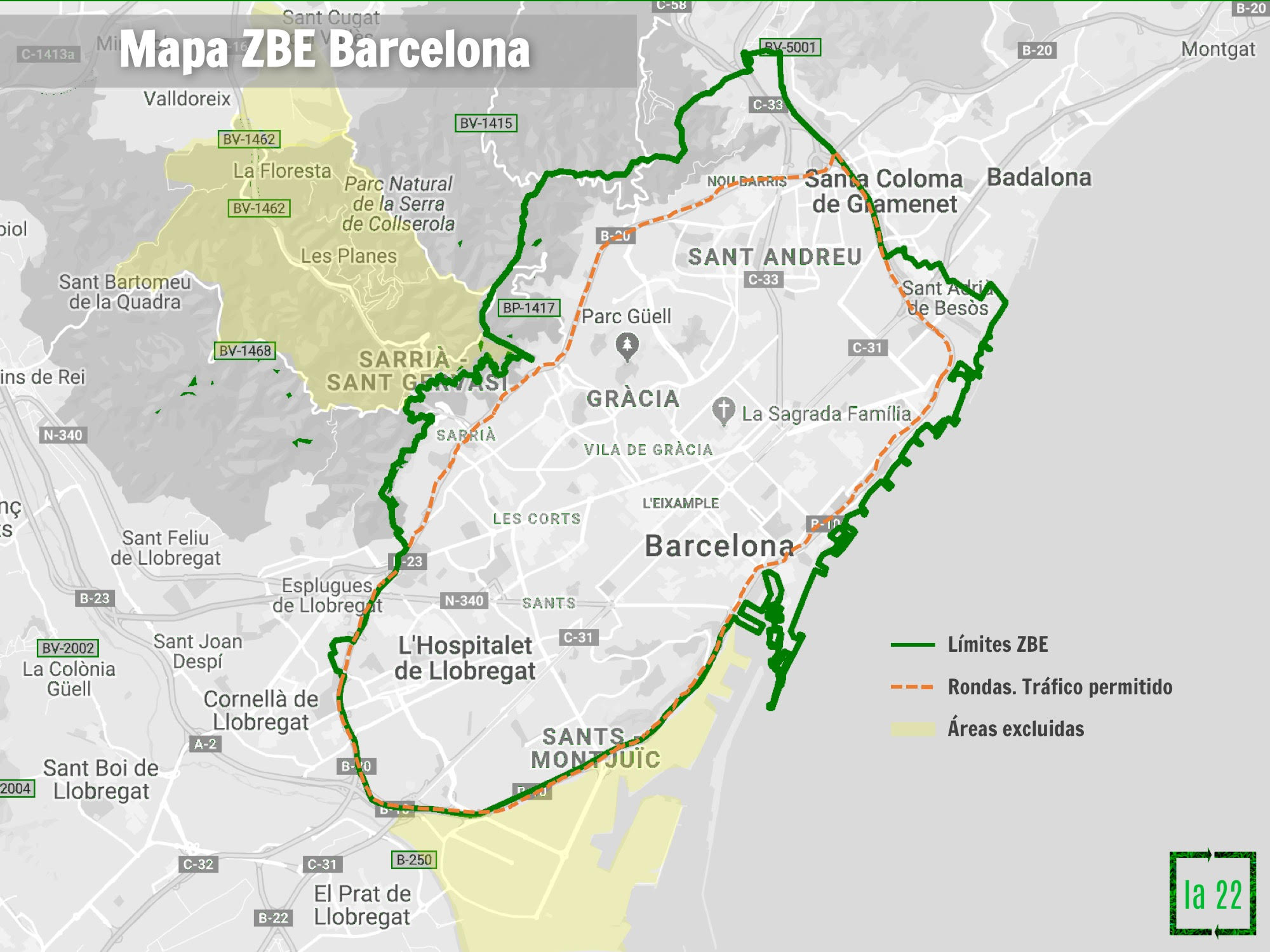 The Low Emission Zone Rondas Barcelona (ZBE Rondas BCN) is the area where access to the most polluting vehicles is restricted. The measure is expected to help reduce emissions by 15%.

In some cases, it is possible that the vehicle does comply with environmental regulations although it does not appear in the DGT database. This may occur if the vehicle manufacturer has adapted it long before the due date. In this case, the environmental label can be requested by following these steps:

The corresponding identification label can be acquired at post offices or through a registered agent. It can also be requested through the mechanic workshop, associated to the Barcelona Automobile Repair Workshops Guild.

The classification of the fleet aims to positively discriminate the most environmentally friendly vehicles and to be an effective instrument at the service of municipal policies, both restrictive traffic in episodes of high pollution, as well as promoting new technologies through tax benefits or related to mobility and the environment.

There are four environmental badges created according to the environmental impact of the vehicles and these will classify and grade the 50% of the most efficient fleet. From highest to lowest efficiency they are:

Eco label: Next in the efficiency scale, these are mostly hybrid vehicles, gas or both.  They will qualify for this label: plug-in electric vehicles with a range of less than 40 km, non-plug-in hybrids (HEV), vehicles powered by natural gas and gas (CNG and LNG) or liquefied petroleum gas (LPG). They must meet the criteria of the C label.

The Barcelona LEZ is formed by the road traffic in the area delimited by the Ronda de Dalt and the Ronda Litoral.  The ring roads are excluded from the low emission zone.  Thus, the entire city of Barcelona is affected, with the exception of the Zona Franca and the neighborhoods of Vallvidrera, Tibidabo and Les Planes, in the upper part of the city.

Yes, vehicles considered polluting and which do not have the DGT sticker will be able to circulate along the Ronda de Dalt and Ronda Litoral because the ring roads are not included in the low emission zone. However, all the exits of the ring roads with direct access to the LEZ will be closed for polluting vehicles.

In 2022 there will finally be no veto for cars and vehicles with label B in the Low Emission Zone (ZBE) of Barcelona. This has been confirmed and clarified by the Metropolitan Area of Barcelona (AMB) in response to doubts received from users.

This document also set 2030 to prohibit the circulation of the ZBE to non-residents with a C label. And before that, in 2024, to leave out of the equation all those with a B label, regardless of where they pay the circulation tax.

But the text itself already stated that these measures would be modulated “depending on the results and the evolution of air quality levels” and based on the “agreements reached with the other competent administrations”.

Therefore, in this statement, the AMB indicates that according to the municipal ordinances of each locality that integrates the Low Emission Zone, B-label vehicles will not suffer the veto for the time being.

Nor will it apply to buses and coaches used for collective transport without a label (prior to the Euro 4 standard and normally registered before 2006 or 2007). At least until June 30, 2022, which is the deadline set for the moratorium for the time being.